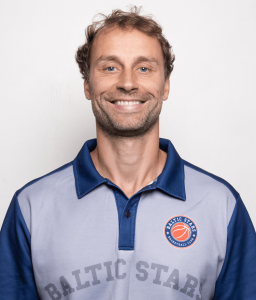 Basketball always was part of Jordanas life since he can remember. He played basketball professionaly in the 2nd Lithuanian division before moving to the States. In there he finished BSc in Business Administration/Marketing and continued playing basketball. Once he moved to London he came up with an idea to establish basketball academy when he saw lack of professional organisations in this country. Baltic Stars Club was established in 2011 with purpose to provide high quality training to young generation. Also, to translate what basketball teaches into real life situations, such us as being resilient, being a great teammate, having discipline and strong work ethic. Jordanas is proud that after 10 years club not only continues teaching kids life lessons and basketball but also became one of the top junior basketball programs in England.

This was achieved together with our players, fans, parents, coaches and sponsors. During all those years Jordanas was recognised by Basketball England as coach of the year in London Region in 2020 and won Joe White award for demonstrating high level of teaching in Luol Deng Camp (2014).