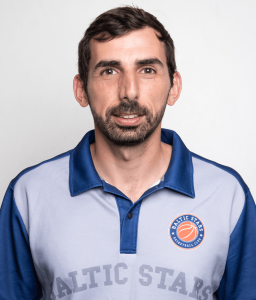 Nestor joined Baltic Stars in 2020/21 season and became Head Coach of U14 team where he was always felt most comfortable at. Nestor brings basketball culture from his home country – Spain. He started coaching in 2008 in his hometown – Tenerife. During all those years he learnt from top coaches in Spain and brought this experience to the United Kingdom. In the United Kingdom Nestor had an opportunity to be appointed as a head coach of U13 & U15 London Regional teams by Basketball England.

Last 5 years he spent working in London Thunder basketball academy where he won U13 Premier League in London and became third in the whole United Kingdom.