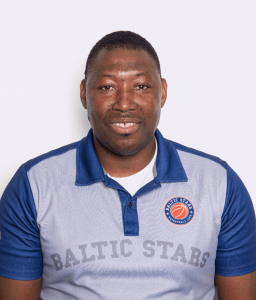 Kelvin Facey has been working at Basketball Club Baltic Stars for the last two seasons. He has played basketball as a High School student, overseas. His athlete’s career was interrupted by injury that empowered him to qualify as a Wheel Chair Coach. In the following years coaching has enabled Kelvin to get back on his feet after the injury as well as pursue career in Basketball Coaching.  He did not stop there. Working with NASSA, UK for over decade, his work was recognised by following awards: John Sage Award (Volunteer Coach Award) in 2012; Gillette Community Coach of the Year in 2014; Sport Coach of the Year, UK later on in 2014 (Winner Award); 2014 UK Sport Award (Runner up) and in 2016 Community Champion Award. Since leaving NASSA, Kelvin has been promoting basketball in various schools of Newham as well as teaching the students he’s been working with a set of tools to handle daily life challenges. As a coach, Kelvin Facey has brought teams to Final Fours numerous times and of various age groups. His work ethics entrusts young athletes to reach their potential.